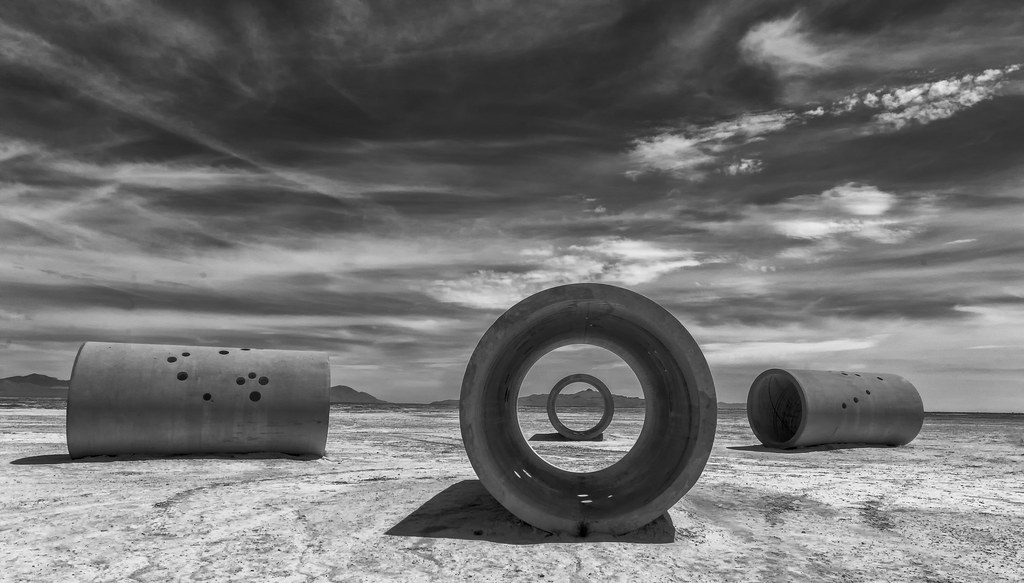 The conception and creation of land art is neither easy nor inexpensive. To place 88 tons of concrete pipe in a Utah desert, artist Nancy Holt needed several years, a boatload of money, and the aid of

The result is remarkable, mesmerizing, enchanting, and enduring. Holt’s Sun Tunnels have lain quietly in the desert since 1976. Time has not appeared to have altered them an iota. 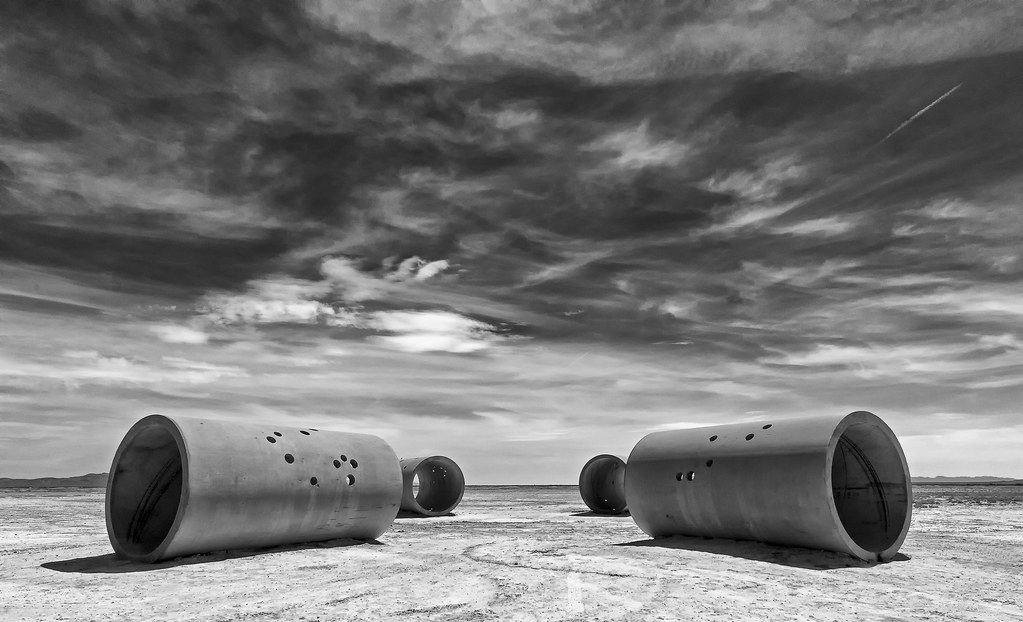 I have known of the Sun Tunnels for a quarter of a century. But they’ve been more than 2,000 miles away from me much of that time. So I drove there this summer. The last 11.5 miles taxed both me and my pickup. (Then again, I didn’t do sufficient study of directions. The last 2.6 miles was rough road — but if you go, I’ll make sure you don’t have to drive that road.) 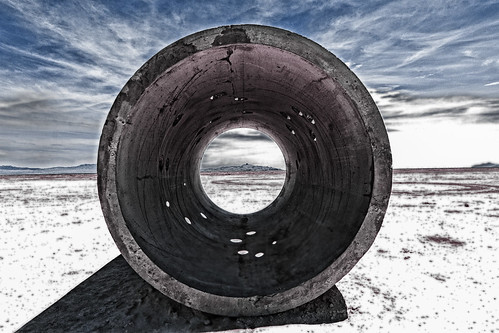 I only spent an hour there and took several photographs. But seeing the Sun Tunnels, experiencing them, trying to understand their place in the landscape, will no doubt draw me back there.

They are perfect. Their alignment is perfect. Quiet, save for wind raking the dry land, reigns. It’s hot. But step inside the tunnels; it’s 15 to 20 degrees cooler. I wish to return and sleep inside one.

What are the Sun Tunnels?

Sun Tunnels consists of four massive concrete tunnels, each eighteen feet long and nine feet in diameter, laid out in the desert in an open X configuration. On the solstices, the tunnels frame the sun as it passes the horizon at sunrise and sunset. In the top of each tunnel, Holt drilled small holes to form the constellations of Draco, Perseus, Columba, and Capricorn. These holes, and the tunnels themselves, act as frames or lenses through which the visitor can view the surrounding sky and landscape of the Great Basin Desert.

In Utah I made drawings and worked with scale models and large hoops in the desert, trying out different lengths, diameters, and placements, and doing photographic studies of the changes in light and shadow. I consulted with an astrophysicist⁵ at the University of Utah about the angles of the solstices at the latitude of my land. Because the land had irregular contours, and the earth was not a perfect sphere, we had to calculate the height of the distant mountains and ridges and, using a computer, readjust the solstice angles from this date. The angles we arrived at formed an “X,” which worked as a configuration for the tunnels. Using a helioscope set for the latitude of the site, it was possible to study the changes in light and shadow in my model for every hour during every day of the year. 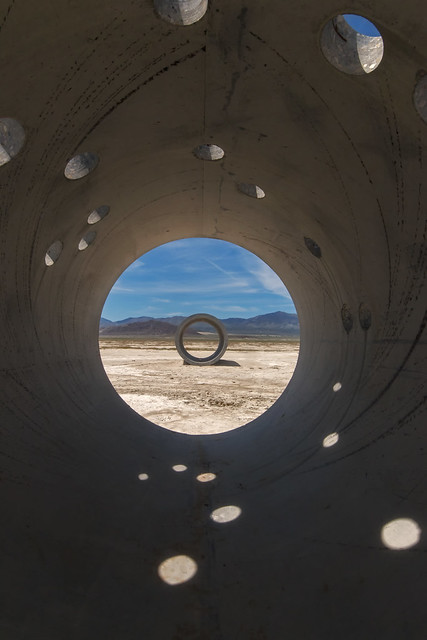 “Time” is not just a mental concept or a mathematical abstraction in the desert. The rocks in the distance are ageless; they have been deposited in layers over hundreds of thousands of year. “Time” takes on a physical presence. Only ten miles south of Sun Tunnels are the Bonneville Salt Flats, one of the few areas in the world where you can actually see the curvature of the earth. Being part of that kind of landscape, and walking on earth that has surely never been walked on before, evokes a sense of being on this planet, rotating in space, in universal time.

By marking the yearly extreme positions of the sun, Sun Tunnels indicates the “cyclical time” of the solar year. The center of the work becomes the center of the world. The changing pattern of light from our “sun-star” marks the days and hours as it passes through the tunnel’s “star-holes.” The positioning of the work is also based on star-study: the surveyor and I were only able to find True North by taking our bearings on the North Star—Polaris—as it ovals around the North Pole because of the earth’s movement.

In my images, holes in the tunnels are visible. They represent constellations, one for each tunnel. Again, from Holt:

I wanted only those with stars of several different magnitudes, so that I could have holes of different diameters. Depending on which of the twelve astronomical charts I consulted, the number and positions of the stars in the constellations varied, increasing my options considerably. Each constellation had also to have enough stars, and to encompass the top half of a tunnel with some holes at eye level on each side, so that the viewer could look through the eye-level holes from the outside and see through the holes on the other side of the tunnel. With those criteria there were only a few constellations that I could use, and from them I chose Draco, Perseus, Columba, and Capricorn. Together, they encompass the globe—Columba is a Southern Hemisphere constellation which slips over the edge of the horizon for a short time each year, but can’t be seen because of the dense atmosphere near the earth. Capricorn is visible in the fall and early winter, and is entered by the sun at the winter solstice. Draco and Perseus are always visible in the sky.

Getting there isn’t easy. Google Lucin, Utah, with satellite image and you’ll see why. It’s about 11.5 miles of fair to bad road. Four-wheel-drive is recommended. This is beyond remote. I had no cell reception at the tunnels or most of the drive in. Use common backcountry sense: Tell someone where you’re going and when you’ll return. If it’s raining, do not go. If it rained heavily yesterday or the day before, do not go. The photo at right of part of Pilot Mountain Road should explain why. 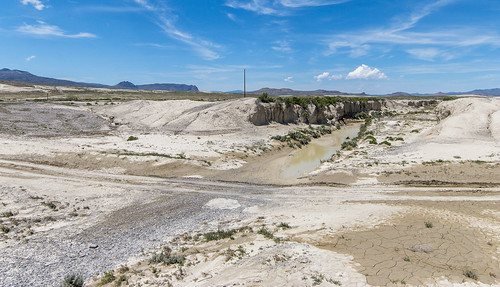 About 10 miles east of the Utah-Nevada border, your GPS unit should pick up Pilot Mountain Road heading south of Utah Route 30. (My GPS did; Google Maps shows it as Grouse Creek Road, later becoming Pilot Mountain Road.) The first three critical turns are marked with a silhouetted sign (see the image below). These will lead you to the railroad tracks, easily viewed in satellite images. From the railroad tracks, about two miles, take Little Pigeon Road (it’s a left turn). Your next right is West Little Pigeon Road and leads directly to the Sun Tunnels. 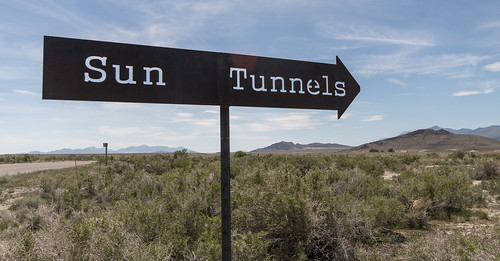 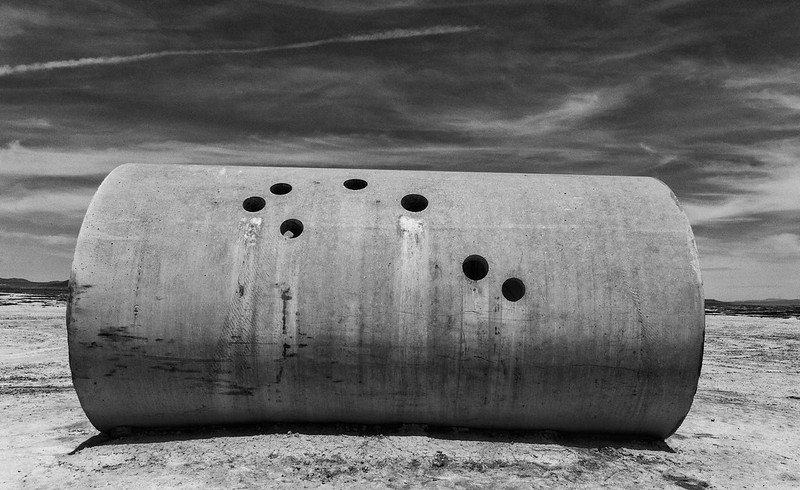